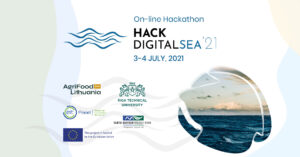 «HACK DigitalSea’21» in the Baltics, was launched on 3-4 of July. Participants sought innovative solutions to the acute challenges for sustainable aquaculture and growing pollution in the Baltic Sea. During the hackathon, teams came up with solutions cleaning the seabed from microplastics and oil pollution and drones to map pollution in the water.

In total, 11 teams took part in the hackathon, two of which represented Estonia. The teams’ solutions were judged by an international jury, which selected the winners in three categories: Most Advanced Solution, Strongest Idea and From Zero to Hero that had shown progress from idea to prototype during the hackathon. The winners of each category were awarded a cash prize worth 4000 euros.

The winner of the Most Advanced Solution category winner team leader Alona Stepanova: «Participation in this event was one of the best experiences we have ever had. The overall level of professionalism of the mentors was extremely high and all the ideas, thoughts and advice they shared were very valuable. We can thank them in advance for any future success we will have.»

2 of the teams answered the call to participate in the hackathon from Estonia, 6 from Latvia and 3 from Lithuania. Within two days, the teams validated their solutions, improved business models, and consulted with 23 industry representatives, experts and business mentors from the three Baltic States. A total of 72 mentoring sessions were conducted over two days.

All the teams that started working in the hackathon made a final pitch. The teams were quite strong and there were a lot of great ideas.

EIT Food is a knowledge and innovation community of the European Institute of Innovation and Technology (EIT). By forging close links between consumers, businesses, start-ups, researchers and students from across Europe, EIT Food supports innovation and sustainable economic initiatives that increase access to quality food, improve the environment and health, create new jobs and boost Europe’s competitiveness. The hackathon was first where three EIT Food Hubs in Baltic states worked together.